About Ghee; Nutrition and Medicinal Uses 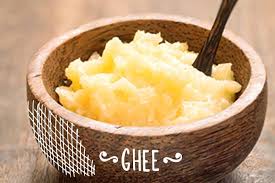 Ghee is a class of clarified butter that originated in South Asia, and is also used in many parts of the world, and called by different names. The word ghee comes from Sanskrit from the word ghrita, which means sprinkled. Clarified butter is prized because it increases agni (digestive fire) without simultaneously fueling Pitta. Ghee in fact, is considered excellent for balancing Pitta. Kapha types generally need to avoid too much oil of any kind, but ghee is the best for them, too.

Ghee is used as a cooking oil.  Small amounts of ghee are good for sautéing vegetables, as a flavoring in place of butter, since ghee is a prepared food, using butter is not the same as using ghee, but where you would ordinarily butter a vegetable dish or a baked potato or mix it into your oatmeal, ghee is a better choice and even drizzling a teaspoon of ghee over food at the table is not just tasty, it is medicinal and has a role to play in the digestive and cleansing process.

Preparation Most ghee in the west is prepared from butter is melted in a pot over medium heat. The butter begins to melt, forming a white froth on top. It is then simmered, while occasional stirring reduces the froth slowly and the color of the butter changes to pale yellow. Then it is cooked on low heat until it turns golden. The residue settles at the bottom and the ghee, which is now clear, golden, translucent and fragrant, is ready. The ghee is then filtered and it solidifies when completely cool.  Ghee has a long shelf-life and needs no refrigeration if kept in an airtight container to prevent oxidation. The shelf life, texture, color and taste of ghee depends on the source of the milk obtained and the method of preparation, and the rule of thumb in Ayurvedic medicine is that the ghee is stored at room temperature, in a dark place in a glass jar with no contamination from a dirty utensil or moisture, it can last indefinitely and actually increases in medicinal properties as it ages.

Ghee is ideal fat for deep frying because its smoke point (where its molecules begin to break down) is 250 °C (482 °F), which is well above typical cooking temperatures of around 200 °C (392 °F) and above that of most vegetable oils.

As a digestive, it helps improve absorption and assimilation. It nourishes ojas, tejas and prana. which are the refined forms of the doshas. It is good for improving memory and lubricates the connective tissue. Ghee makes the body flexible and, in small doses, is tridoshic.

Nutrition
Like any clarified butter, ghee is composed almost entirely of fat; the nutrition facts label found on bottled cow's ghee produced in the USA indicates 8 mg of cholesterol per teaspoon.

Studies on rats have shown that ghee helps to reduce serum cholesterol slightly but not significantly. Studies in Wistar rats have revealed one mechanism by which ghee reduces plasma LDL cholesterol. This action is mediated by an increased secretion of biliary lipids. Furthermore, ghee stimulates the secretion of gastric acid, thus aiding in the digestive process. As such ghee is used to treat constipation and ulcers in Ayurveda.

Indian restaurants and some households may use partially hydrogenated vegetable oil (also known as vanaspati, dalda, or "vegetable ghee") in place of ghee because of its lower cost. This vegetable ghee may contain trans fat. Trans fats are said to cause serious health conditions. The term shuddh ghee, however, is not used in many regions as partially hydrogenated oils are marketed as pure ghee in some areas. In India, the sale of fake ghee is stopped by law enforcement agencies whenever a complaint is made. Ghee is also sometimes called desi (country-made) ghee or asli (genuine) ghee to distinguish it from vegetable ghee.

Ghee contains linoleic acid, an Omega-6 oil and alpha-Linoleic acid, an Omega-3 EFA. EFAs are only used for energy if present in excess, and generally play the role of stimulating metabolism. Correlations with ghee’s effects of increasing agni are of great interest in this regard. Despite their benefits, there are dangers associated eating the wrong ratio of Omega-6 to Omega-3. These include CVD, mental disorders (ADHD, depression, MS and Schizophrenia), and inflammatory diseases. Most of us eat more Omega-6 than 3 but ghee provides both in an ideal ratio of 1:1.

Medicinal Uses
Ayurveda considers ghee to be sāttvik or sattva-guṇi (in the "mode of goodness"), when used as food. Ghee is the main ingredient in some of the Ayurvedic medicines and aids in the detoxification of the tissues as well as their nourishment.

Ghee is a yogavahi-a catalytic agent that carries the medicinal properties of herbs into the seven dhatus or tissues of the body.

Ghee is not to be used when there are high ama (toxic) conditions, such as in excess kapha also known as ama.

Ghee Has a Higher Smoke Point than Butter
Ghee tends to have a higher smoke point than butter. For butter, smoke point is typically reached between 325˚-375˚F (163˚-191˚C). Some clarified butters also fall into this general range, but ghee usually has a higher smoke point, between 400˚-500˚F (204˚-260˚C). This higher smoke point can be an advantage when cooking at high heat since smoke point is that moment when heat damage to some of the components in a fat or oil is sufficient to become visible in the form of smoke. When it comes to our health, heating above smoke point is not a good idea with any oil or fat. For persons choosing to cook in fat at higher heats in the 400˚-500˚F (204˚-260˚C) range, ghee makes sense to use, provided that it's used in moderation (no more than 1-2 tablespoons per day). Even for a person deciding to cook in fat, however, the use of butter at higher heats does not make sense to use due to its lower smoke point (325˚-375˚F/163˚-191˚C).

Ghee carries the medicinal properties of herbs into the seven dhatus or tissues of the body.
Since ghee is an oil with short chain fatty acids, it is absorbed directly in blood via intestinal capillary.

Ghee increases the potency of herbs by carrying the active component to the interior of the cells where they impart the most benefits.

Ghee is a great immunity booster. It nourishes ojas, the subtle essence of all the body tissues. Ghee is very important in regards to free radical scavenging health & longevity.

Ghee with herbal formulations is a great revitalizing tonic for the female reproductive system.

Ghee is a powerful lubricant for the connective tissue, making the body more flexible.

Herbal Ghee is considered a medicine for restoring physical strength, vitality and vigor.

Traditionally ghee is always made from cow's (considered sacred) milk [Sanskrit: गोघृत go-ghṛta], and is a sacred requirement in Vedic yajña and homa ( fire sacrifices), through the medium of agni (fire) to offer oblations to various deities. (See Yajurveda). Fire sacrifices have been performed dating back over 5000 years. Their purpose is for religious, including weddings, funerals and other ceremonies and rituals. Ghee is also necessary in Vedic worship of mūrtis (divine deities), with aarti (offering of ghee lamp) called diyā or dīpa (deep) and for Pañcāmṛta (Panchamruta) where ghee along with sugar, honey, milk, and dahī (curd) is utilized for bathing the deities on the appearance day of L-rd Krishna on Janmashtami, and Śiva (Shiva) on Mahā-śivarātrī (Maha Shivaratri).

There is a hymn to ghee in the Rg Veda (circa 1500 BC) is in praise of ghee, acknowledging its life sustaining and rejuvenating qualities and is intended to be accompanied by ritual libations of the golden substance into a fire. These are some of the words:

This is the secret name of Butter:
"Tongue of the g-ds," "navel of immortality."
We will proclaim the name of Butter;
We will sustain it in this sacrifice by bowing low.
These waves of Butter flow like gazelles before the hunter...
Streams of Butter caress the burning wood.
Agni, the fire, loves them and is satisfied.

Posted by Chaya~Sharon Heller at 7:35 AM