October is Healthy Lung Month; Breathe As If Your Life Depends On It! 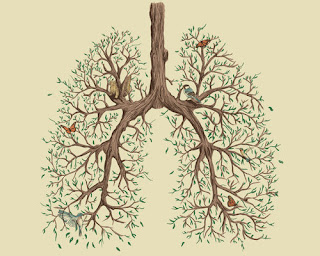 Many books have been written about the science of breath from the yogic perspective and it is a main focus in the origins and most authoritative and respected works, such as Patanjali’s Yoga Sutra, The Hatha Yoga Pratipika and The Siva Samhita and their subsequent interpretations. I have read and studied them and with some of the world’s leading authorities over the last 26 years have experienced this science and its profound life interplay and it's my life’s work to carry on the legacy of educating the future yogis and leaders of our world, and to carry on the wisdom to sincere students who are ready and interested in knowing the truth and awakening to their true self and what that even truly means beyond trendy lingo and generational gaps of time, which are illusory as well.

The lungs and the nervous system:

“The lungs are placed in a recess so sacred and hidden that nature would seem to have specially withdrawn this part of both from the eyes and from the intellect: for, beyond the wish, it has not yet been granted to anyone to fit a window to the breast and redeem from darkness the profounder secrets of nature. For of all of the parts of the body, the lungs alone, as if shrinking from observation, cease from their movement and collapse at once on the first entrance of light and self-revelation. Hence such an ignorance of respiration and a sort of holy wonder. Still let me draw near to the inmost vitals, and concerning so obscure a matter, make at least a guess”. John Mayow, (1674), Proctor’s A History of Breathing Physiology.

Breathing usually happens from the edge of our awareness, but will and volition are always at our disposal. Just as we can choose how many times to chew a bite of food or adjust our stride when we are walking up a hill, so can we choose the manner in which we breathe.

Most of the time, however, we run on “automatic pilot”, allowing input from internal organs and sensory overload to manage the rate and depth of our breathing. Yogis emphasize choice, and have discovered the value of regulating respiration consciously.
Yoga and Ayurvedic anatomy and physiology are not an erroneous mystical idea, they are clear and accurate scientific and spiritual systems and those who study and practice them, it their entirety, find that they reveal more about the internal functioning of the human body than any modern scientific experiment or explanation.

The mind, breath and nervous system interplay within a dynamic feedback loop that controls all functions of the body and mind. This energy network corresponds to the nervous system and is called the nadis. Energy is absorbed and flows through the nadis. The nasal passages have more nerve endings than the mouth, consequently more prāna, our life force, is absorbed during nasal breathing which also has a balancing effect on the nervous system.

The system of Hatha Yoga is composed of postures and breathing, and is based on balancing and increasing the flow of prana, in the physical and subtle bodies.  Prāna exists in all things, and is abundant in air, food, sunlight and water, and expressed through the breath. The key to understanding prāna and energy is breath. One who has strong lungs and good breathing capacity usually has abundant energy.

It is true, however, that the ancient descriptions of nadis and chakras bear a remarkable resemblance to modern anatomical descriptions of nerves and plexuses, respectively. Some scientists have tried to establish a correspondence between the two systems, but the assumption behind such an attempt is that the nerves and plexuses belong to the physical body, while the nadis and chakras belong to subtle body. In other words, they are the subtle counterparts of the nerves and plexuses. The currents of prana flowing through the nadis are the subtle counterparts of the nerve impulses.

The yogis did not dissect the physical body in order to learn about its subtle crosscurrents. Dissecting the physical body to look for subtle energies would be futile. They discovered the network of nadis and chakras by mapping the flow of prana through this network, and they developed this mapping ability through introspective experimentation.

This mirrors the differences in eastern and western thoughts and values. The east values direct vision of truths and pure reasoning, with a comprehensive and holistic approach, verses the west which values the intellectual pursuit of the mind and thinking, compartmentalizing and fragmatizing information.

Bapuji, Swami Kripalu states, "though it is correct that true realization is attained by actual practice, even so, in the beginning, correct knowledge is needed. After arriving at the truth, one should review his previous ideas. If one was mistaken in the past, these errors will be banished by new understanding. If it carries the truth, then both the mind and heart will be highly pleased."


The Yogi understands the relationship and interplay between the body, breath, nerves, mind, prana, and the universe, as all part of a continuum, and he does not set up artificial distinctions and borders between them.

In western thinking, however, there is great tendency for compartmentalization. For instance, the sciences of physiology and psychology have maintained their separate identities. Only in recent times have scientists admitted the psychosomatic origins of disease. Western medicine has now come to recognize the beneficial health giving and invigorating effects of correct voluntary respiration. It is not only acting on the lungs, but the metabolism of the whole human body, mind and consciousness.

According to Yoga and Ayurveda, disease manifests when there is an imbalance in the flow of prana because it keeps us stuck, separate, and ignorant, and allows for the accumulation of toxins, the results of undigested food and experiences, and doesn’t allow the light of clarity to shine. Equilibrium is impossible without the balanced and uninhibited flow of prana, it is the link between the layers of who we are, enabling us to be integrated, within ourselves and then with the world and beyond, thereby integrating different levels of our being into a functional whole.

With increased awareness and control of the subtle aspects of breathing, and appropriate posture sequencing, along with Ayurvedic diet and lifestyle, we can affect deep physical and psychological changes, opening new avenues of being to the conscious mind, providing  powerful tools in the pursuit of truly holistic health, personal growth and ultimate joy.

At some point, every human, will face a time when they will need a strong, healthy nervous system. They will need mental clarity and the back up of spiritual strength to handle the fast pace of change and the challenges of the world. The rapid advances in technology, psychology, and sociology will be huge. The chaos of information in the fast paced computer age will make it difficult for people to cope with their day-to-day lives. The body, mind and spirit will have to be organized to meet these natural human phenomena.


We can say with confidence, the way to do this is through the study and practice of Yoga and Ayurveda, whereby the body, mind, and spirit can be integrated and enhanced and we can awaken and live our highest purpose for ourselves and our world.

Get started with us Thursday, October 10th, 5:30pm-7:00pm, at our Breathing IntoSpontaneous Calm Workshop or at one of our immersion, certification programs that begin October 18th or 25th or a personal consultation or class at ChayaVeda Integrative Healing Arts Studio.

Posted by Chaya~Sharon Heller at 9:01 AM