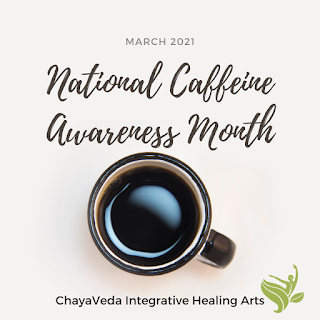 Annually we observe National Caffeine Awareness Month in March to raise awareness regarding its effects, including benefits and risks, and ways consumers can modify consumption. Caffeine use is increasing worldwide and is the most researched food source with valuable studies showing that caffeine has been related to many physical and mental health issues and even our mortality.

Caffeine is believed to be the most frequently consumed psychostimulant and psychoactive drug in the world, ingested predominantly as coffee, though many other natural sources of caffeine-containing beverages and products exist and contain significant amounts of the substance, for example, tea, chocolate, cocoa beverages, soft drinks, and energy drinks. There are also synthetic caffeine substances added to products to promote arousal, alertness, energy, and elevated mood. Over the past decade, the introduction of new caffeine-containing food products, as well as changes in consumption patterns of the more traditional sources of caffeine, has increased scrutiny by health authorities and regulatory bodies about the overall consumption of caffeine and its potential cumulative effects on behavior and physiology.

Caffeine use is increasing worldwide and is part of the diet in all countries. The underlying motivations are mainly concentration and memory enhancement and physical performance improvement. Coffee and caffeine-containing products affect the cardiovascular system, with their positive inotropic and chronotropic effects, meaning, changes to muscles and heartrate, and the central nervous system, with their locomotor activity stimulation and anxiogenic-like effects, which cause anxiety. Thus, it is of interest to examine whether these effects could be detrimental for health and human behavior. Furthermore, caffeine abuse and dependence are becoming more and more common and can lead to caffeine intoxication, which puts individuals at risk for unhealthy life, both physically, mentally and emotionally, as well as premature and unnatural death.

With regard to cognitive functions, caffeine’s properties have been investigated in both human and animal studies. In epidemiological reports, a link between chronic caffeine consumption and a significantly lower risk of developing neurodegenerative diseases, such as Alzheimer’s disease, has been described. Likewise, chronic treatment with caffeine has been shown to be effective in preventing β-amyloid (Aβ) production and memory deficits in experimental models of Alzheimer’s disease. While caffeine seems to prevent or restore memory impairment due to disturbances in brain homeostasis, its cognition-enhancing properties are still a matter of debate. Besides, moderate-to-high consumers develop tolerance to caffeine and only low or non-consumers can eventually benefit from an acute administration.

The use of caffeine to stay awake and alert is a long-standing habit. Coffee is the most popular beverage after water and is consumed worldwide in daily amounts of approximately 1.6 billion cups, which is quite an impressive figure.

The stimulant effects of caffeine on the central nervous system have been known for centuries. In the 19th century a well-known consumer was Honoré De Balzac. Saying that he loved the coffee is not enough. He was completely dependent on it and in the period in which he wrote “The Human Comedy” he went on to drink up to 50 cups a day. In 1830, he published an article in a French magazine called “Pleasures and pains of coffee”, which recounted: "coffee slips into the stomach and you immediately feel a general commotion. Ideas begin to move like the battalions of the Grand Army on the field of the battle and the battle takes place. Memories come at a gallop, carried by the wind”.

Of particular concern is the rate of caffeine intake among populations potentially vulnerable to the negative effects of caffeine consumption: pregnant and lactating women, children and adolescents, young adults, and people with underlying heart or other health conditions, such as mental illness.

In addition, in epidemiological reports and experimental models, caffeine has been found to have a role in the prevention of motor symptoms and loss of dopaminergic neurons in Parkinson’s disease.

With regard to physical activity, it should be noted that until 2004 the International Olympic Committee listed caffeine in its prohibited substances list. Professional athletes who tested positive for more than 12 μg/l of urine – which corresponds to drinking about 5-6 cups of coffee in a day – were banned from the Olympic games.

In the past years, a relationship between coffee consumption and several types of cancers, such as colon, bladder, and pancreatic ones, has been postulated. Yet, the recent literature has provided no evidence of this relationship, it does see potential links to the chemicals that may be produced during the roasting process (The American Caner Society).

Caffeine is implicated in many imbalances and diseases, affecting all the systems of the body, increasing anxiety, sleeplessness, and psychosis. In some cases, caffeine may be necessary and safe for light use, in small doses, moderate use of caffeine can be incorporated into a healthy diet and lifestyle and Ayurveda’s personal approach to health and rejuvenation can help us better understand how.

Coffee and caffeinated beverages are part of the diet in all countries, and cultivating awareness of how we incorporate them into our lives for with mindfulness and education to maintain balance and integrity that is in alignment with our body type, condition and stage of life.

Average amount of caffeine per cup varies per brand and what you consider a cup.
Generally 1 cup -8oz, but some shops serve 12, 16, or even larger cups

2.      Avoid coffee if there are signs of heartburn, acid reflux or indigestion.
This can be signs of excess Pitta.

3.      Avoid coffee if there are signs of dry skin and hair, anxiety, fatigue, poor sleep patterns.
This can be signs of excess Vata.

5.      Add boiled milk and cardamom powder to counter the acidic qualities
(why Chai is a better choice, see Chaya’s recipe below) 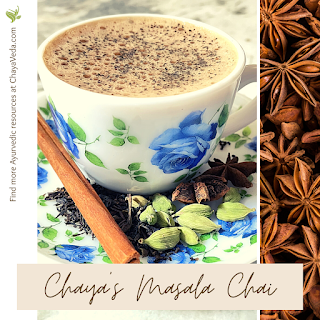 This recipe can be a great alternative to get your caffeine fix, all while reducing caffeine intake. Additionally, cardamom is a anti-inflammatory, alkaline-forming, digestive support.

Instructions:
Boil all the ingredients, simmer and strain. Chai is traditionally made with Indian black tea (available at Indian grocery as Red Label orange pekoe). You can vary the tea, substituting other black teas or make a more untraditional, caffeine free version with green, red or decaf black teas.

Variations: You may vary the amounts of milk and sugar according to taste and dosha. Increasing the milk and or sugar can provoke Kapha. If you use caffeinated tea, the cardamom will help neutralize the acidic effects of the caffeine for pitta.

Summer variation: add a splash of rose water for its cooling, pitta reducing effects and good taste in summer.

2 Tablespoons ground ginger
1 Tablespoon black pepper
½ teaspoon ground cloves
1 ½ Tablespoons cardamom
In a small bowl, mix together all of the ingredients and store in a glass jar.

Posted by Chaya~Sharon Heller at 10:56 AM